I was on a mission.  To eat lunch with my fella, and to get art supplies.  My first time alone…ALONE in the city.  Up until then, it had just been, “I’ll meet you in the IFC.”, which is right next to where I get off the ferry from Lamma.

So, what happened?  Warning, this is a longer post.

I hopped on the ferry, cranked some tunes and checked to make sure the banana that I had stashed in my purse in case of an emergency wasn’t squished or bruised.  The MTR (train) system is underground, which is not great for me.  Those of you who know me, know that I can’t navigate unless I can see the sun.  Thankfully, the signs are in English as well, so there is no excuse to get lost.

After I got on the correct train, going to the correct way, I gave myself an undeserving pat on the back.  I prematurely celebrated… but as my friend and I say, sometimes that’s the only chance you get to celebrate.  I didn’t get off at the correct stop though, purely due to me not reading the perfectly laid out instructions that my fella had given me.  So, after waddling around, I did the last resort thing– double checked my directions and squished back onto the train to correct my mistake.

Mong Kok is so heavily populated, it’s a middle class area (I think) and there is far less English spoken or on signs.  After we got lunch, my fella had to get back to working for the hard-earned money that I was about to spend, so he pointed me in the direction of a mall. 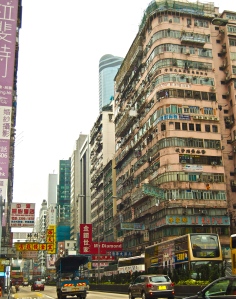 There were so many people, very crowded.  Horns honking, smells a’smelling, there was a lot to take in.  Many times the sidewalk is so crowded that people aren’t always great sharing the sidewalk.  A woman fully ran into me, not just bumped shoulders, but her boob went straight into my shoulder.  Minnesota Nice has kicked in so many times, apologizing constantly, but I realize no one else does, so I’m over that.

There are so many malls.  So many stores to look through.

There was one store that had absolutely nothing of actual value, but I could have blown all of my money on mini magnets, watches, stickers, you name it.  I held back though.

My mission was derailed.  I looked, and my tiny piece of paper that I had written the directions and location of the art supply store was nowhere to be found in my purse.  Ah frack, of course this would happen.  I’m so careless.  I like to go with carefree since it sounds better, but that’s just me being nice to myself.

I decided to wing it, I mean, I was on a mission, right?  I did what anyone else would do, I people watched and judged them.  There had to be some hipster somewhere that would know where this art place was.  Are hipsters into art, no matter where on the globe?  Turns out they are.  Eventually I found a nice hipster girl named Hazel, who helped me by writing down what signs to look for… in Cantonese.  I’m entirely sure what she wrote down was short hand, but it was nice either way.  She was so nice I considered asking her if she wanted to hang out, but figured she couldn’t since she was working.  Also, she was probably 13 years younger than I am, it would be inappropriate.

I took her directions and wandered around for hours looking for what she was trying to show me.  I attempted ask countless more people.  I did get to walk down Tung Choi Street (Goldfish Market) where they sell, ahem, goldfish and other fish to keep as pets, so that was cool. More on that street another day.
Less cool, I wandered into a wet fish market building.  Note: I only like fish alive and in the water or nicely prepared on my plate.  I was trapped, I was in too deep, there was no immediate way out.  I started seeing spots, felt the barfs brewing in my stomach.  My brain was screaming to get out of there, “This is your nightmare, Nicole!”.   It was really hard  to keep it together with scales being scraped and flying off the fish, innards hanging out, blood everywhere, googly fish eyes- dead, staring back at me.  I’m getting a case of the barfies just telling you about it. 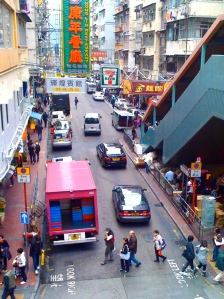 It was starting to get dark.  Hazel had told me to look for a very common drug store, which I found right away, then glanced down the block and saw one more of those, then one more.  It was like being in the midwest and someone tells you to hook a right when a silver Toyota Camry does, or in Hawaii when someone says to look for the ABC store.  They are everywhere.  Not great landmarks to base your directions on, but Hazel was nice, so I’m not going to complain.

I did my best, finally finding a cell phone store where the had one guy that spoke English who pointed me back to exactly where I had been.

What?  That office supply store is the “Art supply” store?  This can’t be right.  But I nodded and thanked him and trekked back there.  I was getting discouraged.  I needed to step into one of those pet stores, baby animals cheer me up.  Oh jeeps, I stepped into a pet store with only kittens.  I had wandered into a pet store with the ONLY animal that I’m allergic to.  Eventually I found one with puppies (the best kind of baby animals) but that’s besides the point.  My day had taken a wrong turn.

It was very clear to me that this was not the place I had originally intended to go to, because there were no canvases, there were mostly jelly pens in every color.  I started to doubt myself.  I was on the verge of tears.  I needed clarity.  How many hours has it been since I ate last?  I grabbed a chocolate soy milk and sat on a fire hydrant.  How did I get so lost?  How many dogs have peed on this very hydrant?  Did that woman just sell another single maxi pad to another stranger?  I also pulled out my now very bruised banana, sick…I hate bruised bananas…but ate it anyway.  There was so much street food, but did I dare be adventurous?  I was alone and unsure of where a public restroom would be.  So very far away from my home base toilet.  No, not today, I’d save that for another time.

I gave up.  I had officially been wandering around for hours now, it was 7:00 in the evening now.  Dusk had fallen and  it was now dark. I went back to the pen store.

Cute pens, but not really what I was looking for.  I can’t be a chooser, if I’m a beggar right?  My dogs were howling, every step was painful. Ok, Ok, I’ll just get some colored pencils, oh, and this water-color pencil set.  And this paintbrush, plus this graph paper.  What?  There’s paint here?  Man, I felt foolish.  Had I been standing in front of this store the whole time?  Poop on a stick, dude.  Maybe this was their art store.  Maybe some online message board had led me astray.

By that time, my fella had just about finished with work.  But I still needed a few more items, so I headed back to Central to finish up.  We made a mad dash for the ferry, but missed it.  By mere minutes.  Totally defeated, he suggested we split a Panini.  A little food and more chocolate soy milk, I was in a much better mood.  I had the essentials.  My mission, although not complete, was not a total wash.

Getting home, after double checking the address– I realize I was TWO streets away from where I needed to be.  Finding that out felt like a swift kick to the shins.

I’m going to go ahead and chalk this one up to an optimistic win.  I got what I needed, right?  I ate with my fella and now have a few more art supplies?  Check and Check.  Mong Kok, I’ll be back for you.  This time with directions and more Cantonese skills.  I refuse to be totally defeated.