I feel like you can tell a lot about a person in the way they treat their dogs.  I know this varies from one area of the world to the next, one person to the next, but either way, it says a lot about who you are.  I really want America to have these little dog parking stalls.  They are so funny to me.

I love most dogs.  What?  Why stick a limitation in a fully confident sentence?  Yes, I love dogs.  But there are 2 and a half dogs that I’ve met that don’t like me.  These two dogs don’t like kids, and in their little doggie brains they think I’m a kid.  Because, you know, I’m bite size.
What’s with the half dog?  The dog downstairs, DauDau, doesn’t let me pet him, but he also doesn’t bark at me.  He barks at almost everyone else.  For example, my fella has been living here for about 6 months.  DauDau recently stopped barking at him, and it has been a slow climb.  He first stopped barking as long as I was with my fella.  Since then, he has stopped barking at him.  But, if my fella approaches from the other direction (not the normal path) and has a friend with him, DauDau barks.  Easily confused–that one.  Plus his name literally translates to BeanBean, so you can’t blame him.  Say it like this, “DowDow”.

Anyway, here on Lamma, people have a lot of dogs.  It’s amazing to me.  Many of them are off leash dogs, but they follow their buddies around with incredible ease and their buddies have incredible confidence that they will follow them.  The other day, I saw a man ride by on a bicycle and a few seconds later a little black puppy was running full speed after him.  I saw them later, the little puppy running so happily after his buddy who kept looking back to make sure the puppy was still there.

Some dogs roam free, like DauDau and Puppee (who is so free roaming that I can’t find him to take a picture right now) are never on leashes, they just do what they want, DauDau just makes sure he’s back in the evening in time to watch the door.  Puppee (say Pahhpeeee and raise the peee part up really high) does whatever he wants, including hassling the tourist on the beach.
Sometimes at night a bunch of dogs have a little party on the beach. They like to sing.  Loudly.  Some nights the dogs sing so loudly the ocean is their background music.  It’s kind of nice.  Kind of not.

I only have one gripe about people and their dogs here on Lamma– they don’t always clean up their poo.  It kind of ruins my day sometime.  One morning, I was out bumming around Lamma and I saw there was a few signs for dogs you can adopt.  I was so engrossed in checking these homeless puppy signs that I walked straight into a pile of poo.  Ew.  Talk about ironic.

Dogs in Hong Kong Central area are a lot different.  They are treated better than I am.  I mean, they are in t-shirts and other clothing.  So, you know I’m constantly giggling.  Dogs in clothes.  Anyway.  People don’t let their dogs walk.  They CARRY them.  Interesting, right?  In dog carriers, purses, and the best, these little dog carriers that strap onto their chest, just like those baby carriers.

I’m planning on writing all of the people in Minnesota that I can, to ask them to install dog parking spaces.  It only makes sense.  Seriously.  Who is with me? 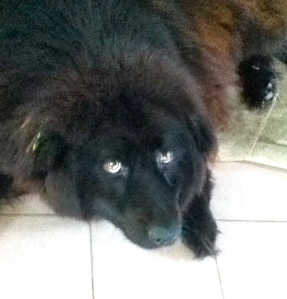